Newington’s redevelopment of the Limestone Road has won a prestigious award at the
Chartered Institute of Housing Awards announced on the 27th February 2015. 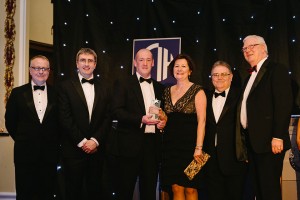 The award is to celebrate collaborative working between housing providers and other organisations to achieve best possible outcomes. It recognises the joint working between Newington and the Duncairn Community Partnership in delivering not only 81 new homes on the Limestone Road but improved community relations in a once notorious interface. The Limestone Road re-development is a powerful example of the far-reaching benefits that can be realised through collaborative working between a housing association and the communities it serves. NHA is grateful to the voluntary contribution of the residents groups who dedicated considerable time and effort to make these schemes and the wider regeneration possible.

Gerard Reilly, Duncairn Community Partnership said:
“We have worked with the people in both areas – the Unionist community and Nationalist community – for 11 years now. What we have seen here is confidence and people’s belief that we could bring about the change. The houses that they actually lived in right across the board were substandard. It was about quality of life issues for us. It was about going to the people on the ground and asking ‘how do you see the future because these are going to be your homes?’

Sheenan McAuley, tenant
“It was a war zone. There was a lot of conflict and anti-social behaviour. Now there is CCTV cameras and it’s become a community because it’s no longer derelict and Newington has been the backbone on that. It’s rebuilt, regenerated and it’s full of families. People are educating to their families to live in peace and to share the community and live together.”